Tex and the City: Lambs Flop

Today on Tex and the City: JP’s meal at The Lambs Club is saved by a very tan designer.  Guest star: Michael Kors. 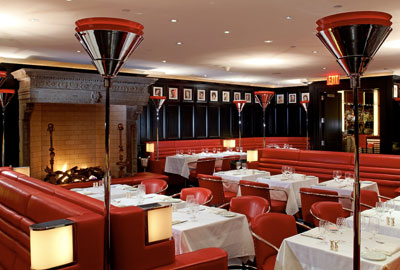 It was an over zealously gingerized take on a traditional Pims Cup that was the most memorable part of last night’s meal at The Lambs Club, Geoffrey Zakarian’s buzzy 44th street eatery plopped down at the back of the Chatwal Hotel.  Well, that, and the fact that Michael Kors’ over zealously tanned skin looked right at home in the back banquette.  Speaking of, anyone notice how the “CFDA lifetime achievement award” designer and our soon-to-be new Speaker of the House share the same skin tone?  Oops, sorry about that.  I got distracted.  Which might be the perfect word to describe everything about The Lambs Club.

Arriving early for my reservation, the host seemed distracted—uninterested—in offering to check my coat, or suggest I have a drink at the bar while waiting for my party to arrive.  Because I had spoken to others who dined here, I knew the main bar is up some weird staircase to the 2nd floor—completely disconnected from the rest of the restaurant.  But I prodded, and he revealed, indeed I could go up the stairs.  As if it’s some secret wonderland.  Hardly.  The most interesting thing about the upstairs is the light fixtures sort of made to look like a faux Chrysler-Empire State building.  On first glance, they seem cute, but on closer inspection they look like the kind of thing you might find at an upscale tourist vendor around the corner.

In fact, the entire restaurant and bar design felt like a set of a Broadway show from just down the street—everything’s a little too loud and showy—like the red banquettes and red glowing lights.  The perfect thing to distract you from the just okay food. 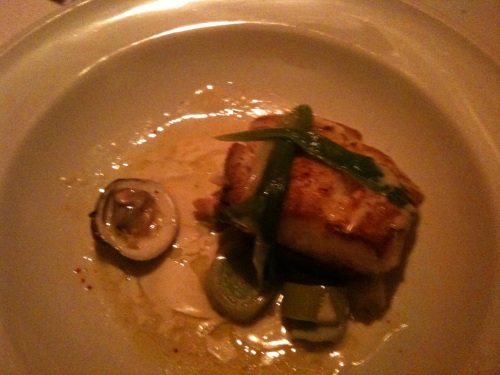 only one of the "clams"

Granted, I knew going in this wasn’t going to be one of the best meals of my life.  Both The New York Times’ Sam Sifton and New York Magazine’s Adam Platt gave it reasonably good reviews for basically what it is—a hotel restaurant headed by a well-regarded Chef.  So I ordered up the items they raved about—Heritage Pork Ravioli and the Chatham Cod Cheeks.  Both of them were much less interesting than any review led me to believe.  The broccoli rabe paired with the over salted ravioli was cooked into mush.  The cod was dry and included only one clam despite the menu’s pronouncement of “clams” plural.  I’m a sucker for a citrus dessert, and the Deep Dish Lemon Meringue Tart didn’t disappoint.  Although it came flying out of the kitchen within seconds of ordering—odd since everything else took forever at the table.  Perhaps that meringue hadn’t been torched to order? Maybe it’s the curse of mediocre reviews—what’s the point in trying too hard if no one coming in is expecting too much?  Just when I started to feel bad about subjecting my out-of-town companions to less than stellar meal, in walked the faux sunkissed Michael Kors and his entourage.  We all perked up, and began discussing our feelings that Mondo had been robbed on Project Runway.  We were thankful for the distraction.

Tex and the City Bottom Line: Because it was easy to score a reservation on OpenTable, The Lambs Club is a perfectly acceptable spot for pre/post theater.  Just hope there’s some tanned eye candy to distract from the less than stellar main course.

Filed under Tex and the City

2 responses to “Tex and the City: Lambs Flop”