Please join me at my new blog Poptimistic—the fresh, frank, fun outlook on life. Like Oprah, my life has grown from a single TV show into an entire network.  Thanks to the success of Alphabet City, my award-winning humorous book and blog about my sitcom life, I’m thrilled to launch a new online network called Poptimisitic.  With that charming gay Mary Tyler Moore spirit you know and love, Poptimistic has even more room to explore a fun, fresh, frank approach to life.  So check out my line-up of shows about relationships, food, travel and culture, and start living a Poptimisitic life! 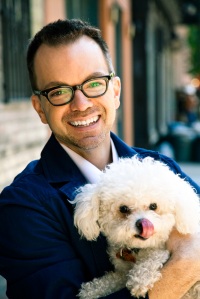 Jon Paul Buchmeyer calls himself a writer-preneur which he described to national publication EDGE as “someone who combines artistry with business acumen. Someone who explores all methods of connecting with readers—blogging, books, twittering—and then working creatively with companies interested in connecting with those fans.”  He is the voice of the internationally popular ABCityblog.com, featuring original content on travel, lifestyle, culture, food, and technology.  In addition to contributing to Bon Appétit and Condé Nast Traveler, he is the author of the award-winning humorous memoir Alphabet City: My So-Called Sitcom Life. Named a finalist for the 2010 Next Generation Indie Book Award, the fast-paced book is about life as a gay Mary Tyler Moore working as a publicist for Tyra, Whoopi and glam magazine giant Condé Nast.  Praise for the memoir includes influential blog Boy Culture saying it has “a snappy writing style that mimics a fun BFF.”  As noted in The New York Times, Jon Paul secured sponsorship from Kimpton Hotels & Restaurants for Alphabet City’s 20-city book tour, with regional support from Whole Foods Markets, JetBlue, Chevy, Hyundai and Subaru—integrating those brands into blog content.  He also writes a regular travel column for GayWeddings.com, the leading online information source for gay and lesbian couples.  Click these links for more of Jon Paul’s writing, press appearances, and film clips.

As a magazine journalist, Jon Paul’s stories for Bon Appétit include a feature about Caribbean resorts in Jamaica and Virgin Gorda working with local farmers to improve access to organic produce, a round-up of Austin’s burgeoning farm-to-table movement, and interviews with acclaimed hotel and restaurant designer Adam Tihany and award-winning filmmaker Ken Burns.  For Condé Nast Traveler, he has written about a journey around Florida’s “Redneck Riviera” in a Mercedes, a “Day of the Dead” overnight camp out in a Mexico City cemetery, and secrets of the Appalachian Trail from Whole Foods Market CEO John Mackey.  He has traveled the globe for the magazine—from Melbourne to Rio—reviewing numerous hotels, restaurants, nightclubs and spas.

Jon Paul is a forceful advocate for increased social responsibility efforts by the global travel industry.  In addition to covering theses issues for ABCityblog’s Green Globe Trekker column, for the past four years he has programmed and produced the Condé Nast Traveler World Savers Congress.  For this editorial event, Jon Paul sets the agenda, recruits speakers, and moderates panels for this prestigious annual gathering of over 300 leaders of the travel industry, held this past year in Singapore.  He has secured keynote participation from a long list of luminaries including Queen Rania of Jordan, renowned economist Jeffrey Sachs, Ambassador Richard Holbrooke, Pulitzer Prize-winning journalist Nicholas Kristof, Oscar-winning documentary filmmaker Louie Psihoyos, and celebrity humanitarians Marcia Gay Harden, Wyclef Jean, Ashley Judd, Mandy Moore, and Edward Norton.  This year, Jon Paul moderated a key panel discussions titled, “To Preserve and Protect: Can Going Green and Going Luxe Co-Exist?” with participants he recruited from Australia, The Bahamas, Costa Rica, South Africa, and the United States.

Jon Paul is also accomplished in the mediums of film and television.  He wrote and directed the cult classic feature film GayTV: The Movie, about a brother and sister who launch their own cable channel filled with pop-culture parodies like Charlie’s Post-Op Angels.  He conceived of and served as the Supervising Producer for Condé Nast Traveler: Insider’s Guide, a 26-episode PBS series.  In addition, he produced and co-hosted a special magazine series that ran on the Travel Channel, as well as produced segments that aired on ABC and Fox News Channel.

Prior to becoming a full-time writer-preneur, Jon Paul was a highly respected communications consultant having worked with some of the world’s most coveted brands including Absolut, The Advocate, Canyon Ranch, Condé Nast Traveler, GQ, The Economist, Hyatt Hotels & Resorts, Johnnie Walker, LEVEL vodka, Levi’s/Dockers, MICHELIN guide, Samsonite, Santa Margherita Wines, Tanqueray, and Wines From Spain, among others.  While at top firms like Ketchum, Bragman and the agency he co-founded Tentpole NY, his work has been honored with some of the most prestigious awards in media and public relations including two GLAAD Media Awards, a CIPRA Award, and an O’Dwyer Award.

A graduate of the University of Texas at Austin, Jon Paul lives in Manhattan’s Washington Heights with his partner Chef Juan Pablo Chavez and foofy dog Frida, both graciously appear in much of his writing.  He is currently at work on the follow-up to his memoir, called 40, Love, about gay Mary Tyler Moore in a midlife crisis.  Twitter @jpbuchmeyer.

5 responses to “About JP”