Today on Alphabet City: Jon Paul admits to cheating on Venus Williams with a TV host. 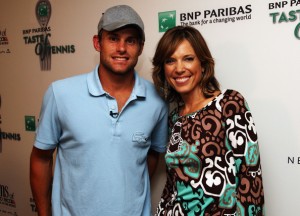 And just like that, in the midst of windy conditions wreaking havoc at the US Open, the Storm disappeared.  No, not the piddly remnants of Hurricane Earl.  I’m talking about the real deal.  Hannah Storm.  That’s right, this year I’ve been two-timing my girl Venus for a tennis girlfriend who doesn’t even step on the court.  I was watching the coverage, they go to break, and the next thing I know, Hannah was gone.  And I was crushed.

Hannah may not have Venus’ forceful serve, but the ESPN anchor has a power all her own.  I’m mesmerized by her ability to keep the brothers McEnroe from coming to fist-a-cuffs on air.  Even better, she knows when to cut off Mary Jo Fernandez in favor of the always accurate and Aussie cutie Darren Cahill.

My guess is that Hannah hasn’t been visiting the US Open as long as me.  This is my ten-year anniversary of attending my favorite annual sporting event.  In fact, the first time I went was on an early date with Chef.  Someone had given me tickets and I asked Chef he wanted to go.  I always say you get to know someone when you travel—even more so at a major sporting event.  Chef had no interest whatsoever in the athletic prowess of the competitors choosing instead to explore the food on offer.  When a freak cold front moved through dropping the temperature nearly 40 degrees, Chef was exposed to my occasionally spendthrift ways.  He was so cold that he wanted to leave.  Not me.  I insisted on purchasing two $150 fleece sweatshirts so that we could stay until the bitter end.  Chef was aghast.  I still think it’s one of the best purchases I’ve ever made.

A lot has changed over the years.  Not always for the better.  I’ve been keeping a list of questions and concerns in case someone who cared—someone like, say, Hannah Storm—ever asked me. 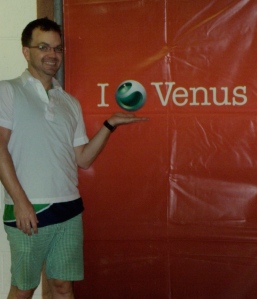 Maybe one day Hannah will have me on her show and I can ask her my penetrating questions.  But only if I can sit next to Venus.  A double date with my two ladies.  That would be a US Open to remember.

Viewer Programming Note: Hannah co-produced the documentary Unmatched about the phenomenal rivalry and friendship between Martina Navratilova and Chris Everett.  It premieres Tuesday Sept 14 at 8pm on ESPN.

Today on Alphabet City: When Jon Paul goes topless on the tennis court, he worries about becoming his father. 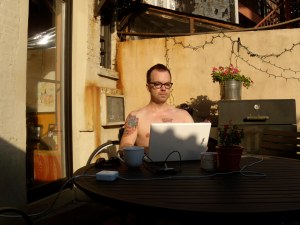 I realize it’s a bit of a cliché to talk about becoming more like our parents as we grow older, but nonetheless, here I am, at 41 ½ indulging in that recognition.  Not only do I sport the bulky frame glasses my Dad wore in the 1960s, but I battle his bushy eyebrows and problem toe nails—more successfully than he did I like to think.  With my recent weight loss and improved upper body strength, I’ve pretty much perfected the same stocky German build he had most of his life.

But I knew it had gotten worse a few weekends ago when Chef discovered me pulling weeds in our outdoor patio with my shirt off.

“Hi hunky gardener.  How did I get so lucky?” he teased.

The thing is that I grew up with a Dad who took his shirt off at almost every outdoor task.  It was the manly thing to do.  And I never quite felt like the man.  When Dad forced me into duty pulling weeds behind the prickly Chinaberry bushes at our house, I certainly didn’t want to take off my shirt for fear of getting scratched.  And when Dad insisted going topless on the tennis court when he played doubles with his friends every weekend, I couldn’t have been more embarrassed.   Why was he such an exhibitionist?  Other men mowed the lawn and played racquet sports fully clothed.  What was his problem?

And then a few weeks ago, it happened to me.  My first summer outing on the NYC courts and I felt compelled to lose my shirt.  It was just way too hot and I didn’t want to wear a tank top dripping sweat on the chilly subway ride home.  One yank later, and it felt liberating.  In short order, my opponent/friend followed suit, as did the much hunkier boys playing on the neighboring courts.  Lucky us!

Back at home, my upper torso continued to bare itself as I completed some necessary yard work.  That’s when Chef caught me.

“I can put a shirt back on if you think it’s too much for the folks at the Church,” I said.

The Baptist Church behind us has a direct view of our garden, and my tattooed pecs.

“No, I was just going to say it’s a good idea.  Great way to get Vitamin D,” Chef said as he tugged off his own shirt and plopped down.

I was astonished since Chef religiously avoids contact with the sun when not wearing sunblock.  But he told me he’d just read a New York Times story on getting 10-15 minutes of sun a day sans Coppertone.

“Now you’ve got a medical excuse to do your chores topless!” Chef announced.

I laughed and thought that after a lifetime of battling weight issues, including a few eating disorders, my willingness to take my shirt off was finally empowering.  It’s not about showing off to others but proving something to myself—that I’m comfortable with and in my skin.  It’s about erasing all those awful moments at camp or in the locker room when I worried what my mates would think of me.

At times, like when those Columbia College boys were pounding serves on the court next to me, I’m sometimes painfully aware I don’t have the six-pack abs of a toned Adonis.  But then I think, neither did my Dad.  And it didn’t seem to bother him.  Now if he’d just worried more about those eyebrows and toenails, I could relax.  Thank god for Vitamin D.

Today on Alphabet City: Jon Paul tries to conquer his fear of a LeRoy Neiman tennis print from his childhood.

Everything about January in New York City seems hard to me.  Especially tennis.  Not only is it wildly expensive to reserve an indoor court, but it’s even harder to figure out how to watch the Australian Open on television.  Is it already tomorrow Down Under?  Are they even playing live?  Do I stay up late to watch Serena or do I have to get up early?  Should I just DVR it and watch later when I already know the outcome?

Others might ignore all the complications and wait for winter to pass before hauling out the racquets.  But not me.  I’ve got a constant reminder hanging in my hallway, nagging me to find a court and work on my serve.  After my father’s death last year, I became the owner of his two garishly yellow and green LeRoy Neiman signed lithographs of tennis players en flagrante.  Those pictures have haunted me since my childhood.

Dancing under the watchful eye of LeRoy Neiman

As I danced around our ‘70s mod den when I was a kid, the prints stared down at me from the wood paneled walls, reinforcing my own awkwardness with the sport.  I would never be able to toss the ball as high as the man in mustard yellow who was perpetually serving on the left, or successfully rush the net like the little men squaring off on the right.

“Eyes on the ball, Paul!  Toss it higher!” my father shouted.

He would conduct drills with hundreds of balls on the court owned by neighbors down the street.  Embarrassed by the semi-public humiliation, I begged my father to build our own tennis court in our backyard.  I was sure that if I had a private court like Tracy Austin, my game would improve.  But nothing seemed to help.

My love-hate relationship with tennis continued through my life.  At one point, a decade went by when I never picked up a racquet.  When I finally got up the courage to try again in New York City, I constantly battled voices in my head telling me I would never be a good player.  That I would never serve like LeRoy’s jock.

So when I became the owner of those prints, I was more than a little nervous.  After transporting the lithographs to the Big Apple, I immediately took them to my neighborhood Turkish framer.  I was hoping he might be able to make them a little more accessible.

“Asking me to tone down the color in these prints is like asking me to work a miracle.  Costs extra!” he laughed. 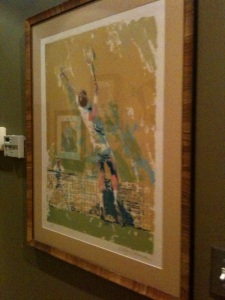 A couple of weeks later, I unveiled the reframed prints to Chef with some trepidation.

“I don’t know.  They bring back bad memories.  Maybe I should just sell them and pay off my student loans,” I said.

Maybe he was right.  It was time for me to stop letting that artwork have a detrimental hold over me.  So I hung one of them prominently in the hallway where I couldn’t possibly miss it before I head out to hit the courts.

This weekend, I played at a doubles party hosted by MTG, New York’s gay tennis group.  Things weren’t going well for me in my first service game—I was down Love-40 and getting tenser by the moment.  The voice of my father swirling in my head.  And then something clicked.  As I got ready for the next serve, I pictured the guy in the painting and rather than let it derail me, I let it propel me—and my ball.  It may not have soared as high as his, but it was a start.  I won the point and suddenly I was back in the game.  The next thing I knew, we were level at Deuce.

After about 11 attempts to close it out, I finally faltered.  But rather than beat myself up, I just laughed and shrugged it off.  I was once again having fun, loving tennis.  And for a guy in his 40s, that makes the score 40-Love.