(Way) Over the Rainbow

Today on Alphabet City: Jon Paul summons up show tunes and sitcoms to battle the blues over mediocre reviews.

You’d think by now I would handle mediocre reviews better than I do.  As a child actor, I was nearly done in by a particularly unflattering Dallas Times Herald critique of my performance as Eldridge Van Zandt III in the sickeningly sweet all-child musical review Calling All Kids.  As I relate in Episode 2 of Alphabet City, I thought the show was my chance at tripping the lights fantastic on the Great White Way with Tommy Tune, but the local liberal paper of record panned the show and called me “chubby.”  It wasn’t enough to dash my hopes of living in NYC, but enough to launch my life-long battle with body image problems.

So I knew that releasing Alphabet City would open me up to even more criticism.  And as an artist and writer I tell myself that not everyone will connect with my work.  But that doesn’t mean you don’t secretly hope everyone in fact will adore it.  Which is probably why it’s taken several talk-me-down-from-the-ledge talks with Chef to get over a posting on Rainbow Review.

Here’s the good part—the excerpts I will promote like a movie ad taken out of context:

The premise of this book is very clever… a very amusing (especially if you have any interest in the celebrity or publishing scene) glimpse into the chaos that keeps our rumor mills going.

Here’s the bad part—the excerpts I won’t be promoting other than to react on this blog:

Several incidents are related with a laugh track mentality that seemed to cry out as moments that were truly severely painful for the writer… All of these are surface stories. No emotional substance to any of them until we get to the last few episodes when we are wrapping up the series…I hope the spin off is more heartfelt and revealing dramedy than plain sitcom.

Ouch.  So here’s the thing: in this book, I view and tell my life through the lens of a sitcom.  And writing in that form requires certain conventions—like not being bitter about any of the guest stars, be it celebrities or family members.  Each episode presents a challenge and a lesson learned—and overall, the kid from Texas who moved to NYC with a personal life a mess, finds a new life (and love) in Manhattan.

The reviewer seems to want a different type of show altogether—something darker, more suitable on HBO or Showtime, than the network of Mary Tyler Moore.  To me, that’s asking for a different book entirely.  It’s like wanting to see MTM ten years later—bitter, depressed and in therapy.  More Augusten Burroughs than Gary Tyler Moore, I’d say.  My readers and fans want and enjoy something a little lighter—more optimistic.  They know I’ve suffered through painful moments, but at the end of the day, I’ve learned and keep moving and keep smiling.

It’s funny—I’m running into people on book tour who are desperate for me to reveal more snarky details of celebrities and my family, and aren’t happy when I tell them that Gary Tyler Moore tries to remain above that.  I think it’s sad when people root for others—even famous faces—to be unhappy.

As I complained to Chef this morning, he just looked at me, “All press is good press, right?”  That made me smile.  I don’t necessarily believe that.  But I do know that mediocre reviews are a Fact of Life.  Like that sitcom’s opening, “You can take the good/take the bad/you take them both/and there you have/the Facts of Life.”  And I also know that it’s a fact of life that not everyone will love you or your work.  So the rest of the day, I’ve been singing from one of my most inspirational Broadway productions [title of show]:

When I head back out on book tour in a week, I can’t wait to keep meeting those 9 people.

Sometimes my sitcom life veers off course and right onto the Broadway stage.  I’ve practically been a show queen since birth, so I’m often inspired by tap dancing tunes.  Here’s how bad it is: I run on the treadmill to a mix called “WorkoutShowtunes2.”  Tuesday, at the Kimpton’s Hotel Palomar Dallas spiffy workout room, the lady next to me nearly came unglued as I inadvertently sang/blurted out the lyrics to In the Heights’ When You’re Home—”and that song you’re hearing is the neighborhood just cheering you along.” But I couldn’t help it.  The song spoke to me in a new way as I imagined myself as the lead character Nina returning from afar while the hunky Benny sings to her about the neighborhood rooting for her success.  That’s how I felt the last several days in the DFW Metroplex—my hometown came through for me in some very special ways.

Cathy pulled out all the stops

First up on Tuesday was a Donna Reed inspired photo shoot clutching a faux-Oscar on the grand staircase of Dallas’ Hotel Palomar—a campy shot exclusive to Arnold Wayne Joes at the Dallas Voice of course.  Then I headed to Colleyville, where one of my many mothers-in-law Cathy—in “reality” she’s Angela’s Mom—had pulled out all the stops for an Alphabet City themed luncheon.  Cathy may have read the book closer than anyone I know pulling out inspired dishes like fresh baked Whoopi Pies accompanying pierogies (not a Texas delicacy I assure you), pigs n’ blanket, and even “Mrs. Buchmeyer’s Thimble Cookies” from Episode 2!  Cathy has always been one of those people who understood my own familial challenges, and happily adopted me into her family back when Angela and I were at the University of Texas-Austin.

I always feel lucky to call myself the “only Landon son not related by marriage.”  Her friends couldn’t have been sweeter, many buying multiple copies.

Back in Dallas, I fretted if anyone would show up for the final event at the Hotel Palomar.  Although attendance was low on quantity, it more than made up for it in quality.  Former cast members I hadn’t seen in a decade or two surprised me with their support: the father of the Schindler kids I acted along side in my pre-teen thespian years as a Junior Player (he bought four books), and even my ex-partner Nathan (he bought three books).  Best of all, my sister Pam brought my niece Robin just graduating from high school—she bought one book although I warned her about reading the episode called Babylon, although she’s off to college soon so maybe it’s good background!

Persian cat Pfeffa was my early stand-in for Oscar

There’s a song that keeps playing in my head from one of my favorite recent influences [title of show].  Heidi sings “A Way Back to Then” near the end of the show.  Here’s how it begins and I think you’ll get a sense of why I connect with it so much:

Heidi goes onto sing about how “the mundane sets in” as an adult and you lose site of that dream, but you then life takes unexpected turns.

You’re that little girl / With her wings unfurled / Flying again / Back in your backyard dancing / I found a way back to then.

Hard for me to say it any better than a song.  So thanks Dallas, for helping me find a way back to then.

There's nothing I wouldn't do for a sale

By the end of book tour day 2, I was sprawled on the floor of a fancy home in Southlake doing my best Playgirl pose for the alumna of Chi-Omega Sorority.  Anything for a sale.  And they bought 20 books at a Sex and the City themed party (was I Aidan or Mr. Big?)—the perfect end to a day that began with me demonstrating the Shake Weight on Good Morning Texas—anything for more air time!

See how I hold the book too?

Victory Park.  In Episode 5, I write that I learned from Tyra about book tour etiquette, including

always carry an extra copy of Tyra’s book along with a summary of key points and list of suggested questions because the host of the local ‘Wake Up’ morning show will have lost hers.’”

Well, leave it to Dallas’ own Rob McCollum, host of Good Morning Texas, to prove the exception to the rule.  Not only did the he read the book fully, he shared with me he was also the son of a Federal Judge and put me right at ease.  In typical Texas style, the crew was so helpful they even took behind-the-scenes photos for me. 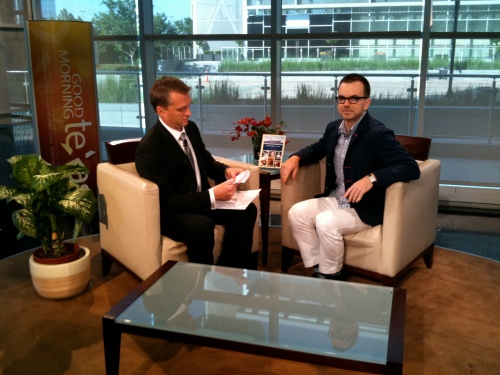 Believe me, you don’t find that level of support at many morning shows.  Still, I felt like I needed to smile more, and forgot to put in a special plug for sponsor Kimpton Hotels (although they were listed on the graphics).  My favorite comment from my stepmother giving kudos to the make-up people for doing a great job.  Hey, that make-up person was ME, thanks to a tinted moisturizer. 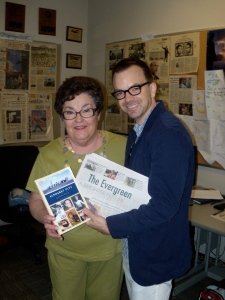 The Hill won't be the same without Dr. Stewart, who helped launch my journalism career

Addison.  Next stop, my alma mater The Greenhill School where Katie Young toured me around and arranged for the Montgomery Library to take ownership of a signed copy of Alphabet City.  Hey kids, maybe don’t read the episode about Babylon?  Then again, there’s probably nothing these kids don’t know about sex anymore.  I loved that everywhere I went there were stickers from GLSEN indicating the school is a safe place for gay teens.  And as I told Katie, I credit the school, and the teachers, with pretty much saving my life and keeping me on path during the chaotic teen years.  Although I’ve kept my distance, the school is never far from my heart—and what a special place it remains, including an organic garden that supplies some of the school food!  Can’t wait to catch-up with more alums on the road—it means so much that the people who helped me get through high school—and believe me, it took a village—are still sticking by me. 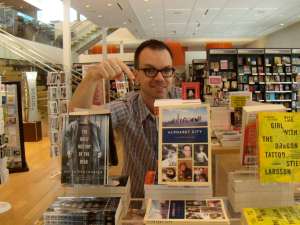 Plano.  If you don’t have library privileges at Greenhill, or you prefer to actually purchase a copy from a brick and mortar store, then RUN don’t WALK to Legacy Books in Plano—the first store in the country to have Alphabet City on display for all!  Of course I pressed into service an employee to take a picture of me with my baby—at first she didn’t believe that I was the author.  Do I look that different from the cover?!

Lakewood/SMU.  A homecoming of sorts—Kimpton’s Hotel Palomar, not only one of the sponsors of the tour, but the scene of many episodes of my early life.  Mary/Gary feels right at home in the 70s chic environment, running on the treadmill singing the lyrics to “A Way Back to Then,” from my one of my inspiration influences Broadway’s [title of show].

Southlake.  Which brings me to my life as a Playgirl centerfold pledging Chi-O.  Honestly, I’d been looking forward to this night since Angela’s sister Mandy organized it a month or so ago.  I truly believe there’s something for everyone in this book—and these ladies proved it.  Boy, do they know how to have fun with a very energized Sex and the City theme.  Because they laughed at every punch line from the readings about “summering,” first encounter with Tyra, and my mother’s visit, I was not shy about taking any photo they asked.  They were so gracious—constantly thanking me for spending time with them, and even took a liking to my latest iPhone SwipeIt app that allows me to take credit cards! 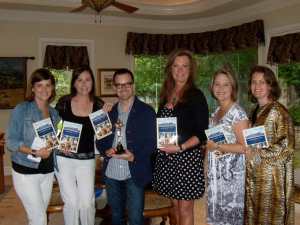 Well believe me ladies, the pleasure was ALL mine.  I just wished Chef could have been there to see the hostess Lana’s outdoor kitchen.  See you the next year with 40, Love.

Thankfully, Gary Tyler Moore has the spunky energy to carry us both through book tour.